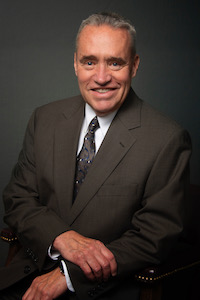 Colorado Attorney Raymond Chamberland has dedicated his entire professional life to serving the United States and taking care of people who need his legal advice and protection. Prior to founding Chamberland Law in Colorado Springs in 2005, Ray spent more than 25 years as a member of the U.S. military, first as a missile combat crew member and then later as a JAG at Patrick Air Force Base, where he handled thousands of military family law cases.

Ray later transferred to Vandenberg Air Force Base, where he was promoted to the position of Staff Judge Advocate, which is the military equivalent of a City Attorney position, and was in charge of the other JAGs on base. In addition to family law cases, Ray has also dealt with cases involving civil law, environmental law, and contracts. Prior to joining the U.S. Air Force, Ray was a volunteer fireman. After retiring from the US Air Force out of Vandenberg AFB in California, Ray and his wife Mary moved to Colorado and he founded Chamberland Law in downtown Colorado Springs. Ray loves practicing family law in Colorado because he now helps both civilian and military families get through what can sometimes be the most challenging times in their lives.

Colorado Attorney Ray Chamberland provides personalized legal representation to all of his clients. Ray handles every detail of his clients’ cases. With strength, sensitivity and compassion, he guides them toward making decisions that are in the best interests of them and their children Many of Ray's current and former clients say that they chose him to represent them because they instinctively knew that Ray was someone that would take care of them and fight for their rights.

Getting the Best Outcome

Ray works collaboratively with his clients in an effort to secure the best outcome for their cases. He does his best to make the process as painless as possible for them and their children by working toward consensus and fair settlements through negotiation, settlement conferences, and Alternative Dispute Resolution (ADR).

In the event that resolution through mediation or negotiation proves impossible, Ray is a skillful litigator and a brilliant strategist. With his years of military training and experience as a U.S. combat crew member and a Staff Judge Advocate, Ray is a zealous advocate for his clients, who know that he will take no prisoners in the fight to secure the best agreements or settlements for them.

To schedule your initial consultation with Colorado Springs Attorney Ray Chamberland, call Chamberland Law at (719) 527-3999 or contact us online.

Client Reviews
★★★★★
"Ray did an excellent job representing me in my custody case involving my two children. He and his staff were genuinely interested in my case, they were responsive in a timely manner, and the attorney was well-prepared in court. We ended up with a good result and I will use his services again in the future should the need arise. I could not have done it on my own and I appreciate the excellent service he provides!" Jim
★★★★★
"He did such a great job during my divorce & custody battle with my ex-husband. Ray & Cindy are extremely responsive, helpful, accommodating and understanding of all situations. He was able to get me everything I wanted and I recommend him to everyone. In fact, I'm almost positive my ex husband even refers people to Ray for divorce and custody haha." Tina
★★★★★
"Ray and his staff did a great job on my divorce case! It's a tough situation to be in but Ray's advice was accurate and helpful and he did not sugar-coat anything. The chosen custody evaluator did a good job with his investigation as Ray said he would, and my concerns were always taken seriously by the attorney. He was prompt in answering my questions and did his best to keep my attorneys fees as low as possible. Together we achieved a good result and I would use his services again in the future." Richard
View More
Submit a Law Firm Client Review